A day at Wet ‘n Wild

The day was already close to 90 degrees at 10am, so we thought that taking the kids to spend the day at Wet ‘n Wild was the obvious choice.  Wet ‘n Wild is the watermark located in Palm Springs.  We were convinced it would be packed, given that it was spring break so we set off shortly before the park opened–they are open 11am to 5pm every day.  But before we left, I checked out tickets online to see if there were any discounts available.  Admission is pricey at $36.99 for adults and $26.99 for kids.  Parking is an additional $10.  We were able to buy tickets online (including parking), but there were no discounts available, so the only advantage to buying ahead of time is being able to go to the front of the line, rather than waiting in line for tickets after arrival.

Since we were visiting my parents on this particular vacation, we were lucky enough to have access to a car, but Palm Springs valley has plenty of ride options available.  Some favorites include Enterprise and Alamo.  Ride services include AmPM Shuttle Service, Desert City Cab and Uber.

The park was surprisingly slow, given that it was spring break and we had no problem finding parking and getting tickets.  Our first stop in the watermark was getting a locker key – yet another $11 charge.  Then we headed for the wave pool.  The water was freezing.  It was not heated at all and even though it was 95 degrees outside, it was unbearable.  Even the kids had an issue with it.  We were able to deal with it for about ten minutes but it wasn’t even fun because we were so cold.  So we headed over to the lazy river, thinking surely it must be heated since people were sitting in it being, well, lazy.  But no.  It was absolutely freezing and the only think that saved us was that the inner tubes we sat on were so big that most of our body was out of the water.  Overall the lazy river was fun–the four of us held hands and meandered around the river for about 20 minutes.  Soon after that, however, the kids began to tire of it so we thought getting a drink and a snack was in order. 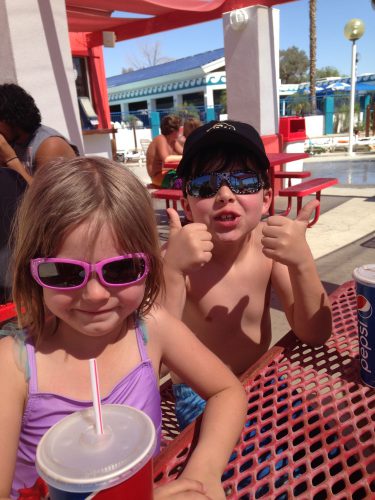 After walking all over the park, looking for a place for food, we discovered there were only two restaurants serving food and the bar was completely closed.  Pretty disappointing considering it was spring break and I definitely felt like they should have been much more prepared for the influx of spring breakers.  The only thing available were chalupas, slices of greasy pizzas and huge Pepsis and Sprites.  Unsatisfying to say the least.  I wished we had brought our own food, as they did have a picnic area to eat in.

Ready to hit our first waterslide!  We picked one that looked pretty tame and had a height requirement that allowed Zoe to participate. The inner tubes allowed for three people at a time, so we divided up into couples and waited in line for at least a half hour.  It was ridiculous and we were all in a pretty foul mood by the time we got an inner tube to take down.  The ride was fun but we soon discovered that every other ride in the park that had a height requirement that Zoe could meet, required people to go down one at a time–meaning Zoe and Max had to go down the waterslides on their own.  Neither of them wanted to do it by themselves and, frankly, I didn’t really want them to do it by themselves.  I think it would have really scared them.  So, we decided no more waterslides and we headed over to the Kahuna’s Beach House, a 4-story “fun house” with small slides and fountains.  Here, the kids had a wonderful time!  Keith and I sat on a bench and watched them for a good hour.

If you decide to hit Wet’n Wild in Palm Springs, here are some suggestions: