Getting lost in Kathmandu’s Monkey Temple 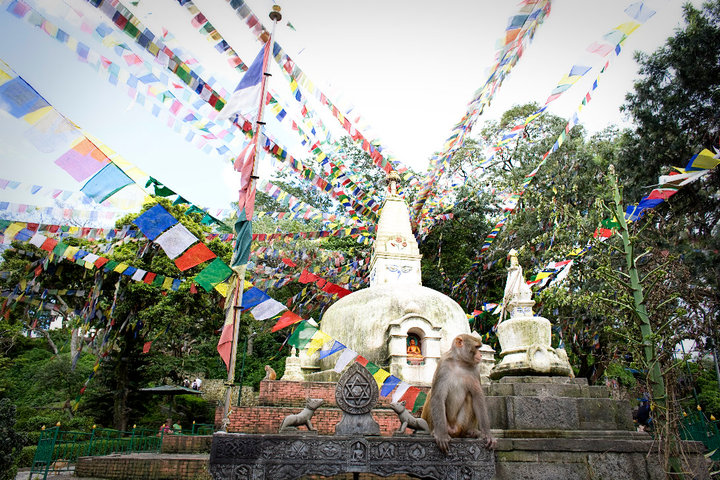 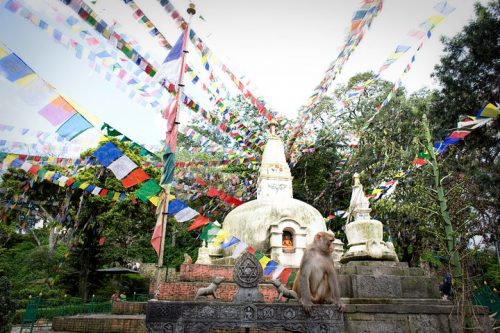 Anyone who knows me, knows I am obsessed with Nepal and have wanted to go there since I was about 20 years old and saw a picture of Mt. Everest. I am fascinated with the people, the culture, the architecture such as Kathmandu’s Monkey Temple, everything. In fact, when Keith first started talking about a job offer in Qatar, the very first thing I did was look on a map to see how far a flight to Kathmandu was. Four hours. Four hours from Doha and I would be able to see a country I had always wanted to see. That alone sold me on living in Qatar for 3 years.

Surprisingly, we ended up waiting until our second year in Doha when Zoe was 8 months old to finally get there. Trekking probably wasn’t going to happen with an 8 month old so we decided on Kathmandu. Since Keith’s mom also wanted to see Nepal, we waited until they were visiting us in Doha so we could all go together. I must admit, having an extra pair of hands in Kathmandu was appealing.

Planning the trip was as simple as calling Qatar Airways and booking a package with them. We wanted to stay in a pretty mainstream hotel since Zoe was a baby so we ended up booking the Hyatt. Not too authentic but Zoe was barely eating solid food at that point, so I really didn’t want to get to crazy. Qatar Airways was great about booking us a package with a tour guide to drive us around and taking us to some of the main places we wanted to hit. On our list? Durbar Square, Kathmandu’s Monkey Temple, Bhaktapur, Boudha, Thamel and Freak Street. We also wanted to see Mount Everest but had to settle for a plane ride over it, rather than trekking to it!

Swayambhunath, or “monkey temple”  is a Buddhist temple atop a hill above Kathmandu. The temple has been in use since the 5th century A.D. and consists of a main stupa in the middle, surrounded by smaller temples, shrines, prayer wheels and prayer flags. To get to the top of the temple, visitors climb 365 steps. The temple is overrun with friendly monkeys, considered holy by the Buddhists of Nepal.

When we arrived, we thought we would climb to the top, take in the beautiful the sites and learn about Buddhism, than climb back down to continue on our visit in the city. Max was excited for the monkeys and I had Zoe strapped to my chest in a Beco carrier when we set off up the steps. A very long, sweaty time later, we reached the top and were amazed. It was beautiful! The stupa is overwhelming, the prayer wheels were intricately carved, local residents were praying in various areas and a man was stoking some fires beneath the stupa. Monkeys were everywhere, to Max’s delight (and they were looking very intently at George). Zoe didn’t know what was going on. It was even more overwhelmingly beautiful when we walked to the edge and saw the view of Kathmandu stretching before us. 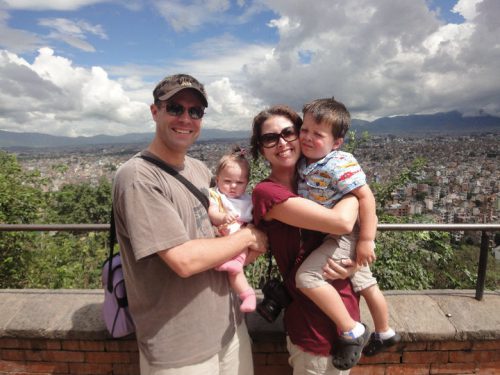 I whipped out my camera and took pictures of everything I saw, wandering away from the group a bit with my father in law, who was holding Max. I’m glad I took pictures when I did because what happened next is the stuff of family legend. My father in law and I, not seeing Keith and his mom, figured they had already done down to the bottom of the stairs. So we found some stairs and went down to what we thought was the main entrance to monkey temple. At the bottom – again a very long sweaty time because it was hot and I had Zoe strapped to my chest – we were confused. This didn’t look like the entrance. What was happening here? Where were all the people, our family, the guides? 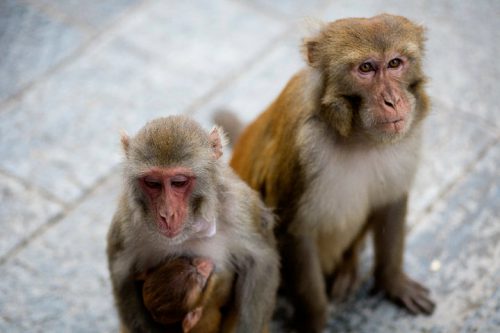 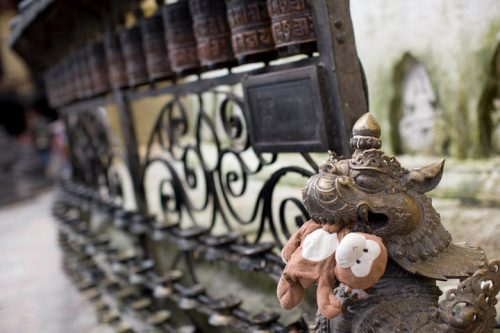 It soon became obvious to us that we had gone down the wrong stairs (yes there are more than one set of stairs in monkey temple!). No problem, we thought, we’ll just got down this path and go around the temple, which will eventually meet up with the stairs we had gone up and we’ll find Keith and his mom.

Nope. We were walking along this path overlooking a Kathmandu street for close to a half hour, having no idea where we were. We had no money, no ID (Keith had my purse because I gave it to him while I was taking pictures), no water, no food, a 3 year old and an 8 month old. We wandered. And wandered. We tried to ask people for directions but unfortunately couldn’t find anyone who spoke English. We went up some stairs and down some stairs. And we realized how immense Monkey Temple really is. After and hour, Zoe was thankfully asleep in the carrier and Max was riding on grandpa’s shoulders and were were all dripping with sweat. After an hour and ten minutes, I started to get scared. What was to become of us? Would we live in Kathmandu’s Monkey Temple? Die of thirst? How do you get out of this place??!

On a whim, we went up one more stairway and came around a bend which looked slightly familiar. The path descended through some bushes and trees and we saw a waving figure in the distance. It was Keith! He was so far away we could not even hear him yelling, but we saw him waving and followed the path to reunite.

Getting lost in Kathmandu’s Monkey Temple was, I suppose, a bonding experience for my father in law and I, but it was also really scary. Here I was with two kids and no water, wandering around an ancient city, totally unprepared. During my travels now, I always make sure I have my ID on me and some cash in case I get separated from Keith. I’m just glad the kids were young enough to think of it as an adventure….or, in Zoe’s case, nap time. I can’t even begin to imagine the level of complaining if this situation had happened today. Family travelers – always have water with you! 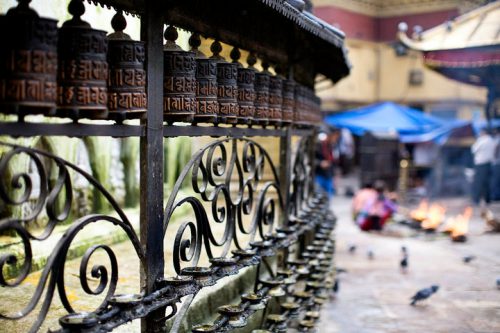 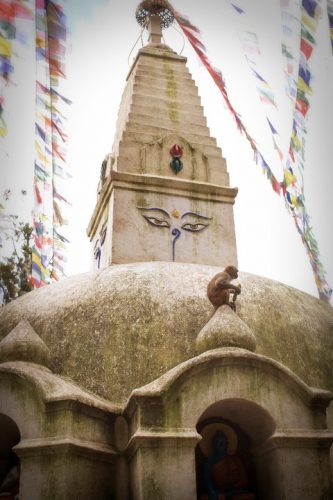 Interested in traveling to Kathmandu, Nepal? You can reach me at mdownham@departurelounge.com and I’ll be happy to plan a trip for you.