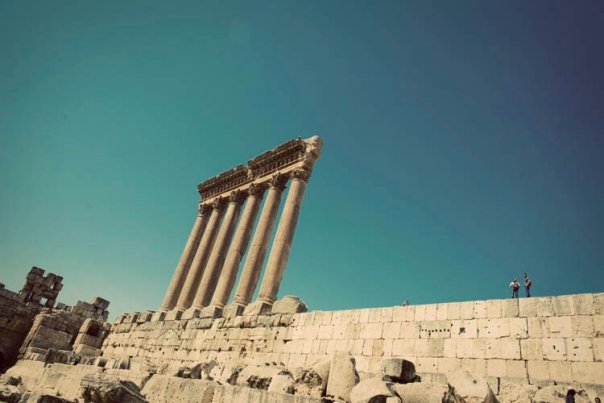 What can I say about doing Lebanon with kids, other than is was surprisingly easy. Doing Lebanon while pregnant? Not as easy! Now, everyone handles pregnancy differently, but lets just say I have a high pain tolerance and I was pretty stoic for my first pregnancy.  I rocked high heels a week before my due date. I walked or exercised every day.  I was a wedding photographer and shot weddings with no complaint through my 8th month (the look on bride’s faces when I arrived at the wedding during that 8th month was comical).  I hiked the Inca Trail to Machu Picchu at 6 weeks pregnant, for crikey’s sake, how hard could visiting Lebanon in September be?  Hmm.  Whooooole different situation here with my second pregnancy. Aside from the pregnancy; however, doing Lebanon with kids is surprisingly easy. 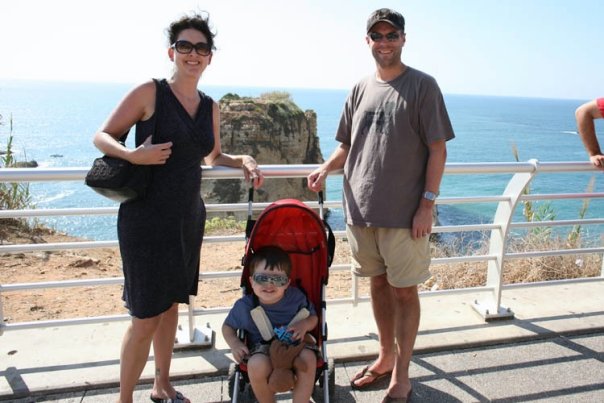 On the coast in Beirut. Notice the flat shoes and very breezy clothing for the profuse sweating I was doing.

We traveled to Lebanon when we lived in Doha, Qatar so the flight was minimal and pretty easy.  We also went when my in laws were visiting because we hoped that an extra pair of hands would be handy with me 20 weeks pregnant.  I booked a deal through Qatar Airways for flight and a stay at Le Royal in Beirut for 4 days.  The website had amazing pictures and it seemed like an amazing hotel–water park, several restaurants and it was perched on a hill that looked amazing.  Note to self: When pregnant, hills are not good.

I opted out of hiring a tour company because we weren’t sure what we wanted to do and when so when we arrived we sat down and mapped out what we wanted to see and hired cars/vans through the hotel to get us around and show us different areas we wanted to see. Be warned – if you’re traveling with small kids, know that car seats aren’t used nearly as much as we do in this part of the world. However, for the ultimate list of car services with car seats around there world, check out The Family Voyage.

First up on our agenda?  The pool.  It was warm and mama needed some relaxation time.  Especially since Grandma was on hand to do things like, you know, actually go in the pool with the 2 year old.  I settled in. 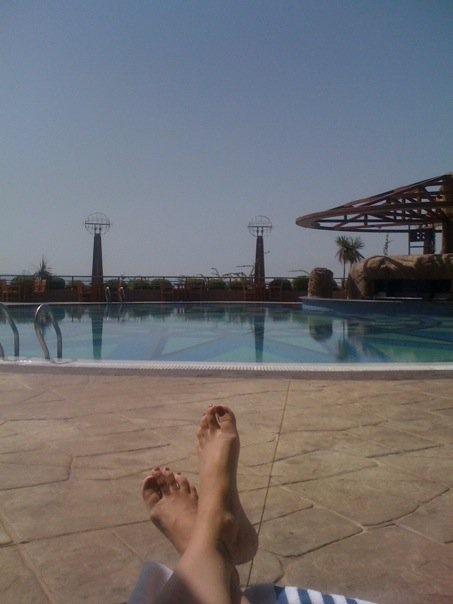 Ah, but that warmth led to the need to go into the pool.  And when I jumped into said pool?

Freezing.  Like scream out loud, they-have-not-heated-this-pool-in-a-decade-type shrieking. I seriously can’t even believe my unborn child survived the shock of his water.  The Lebanese lifeguard (very nice man, by the way) did not seem to think anything was amiss and just nodded and smiled.  Hmm, apparently heated water is passé in Beirut?  No matter, my savior, otherwise known as mother-in-law, was here.  Woman totally took one for the team and got in the pool with Max, who didn’t seem to think that there was any problem with subzero temperatures.  Such is life for a two year old.  As long as they can splash and get crazy, everything’s cool. Goddess mother in law stayed in that pool playing with Max for over an hour.

Next up on the agenda was a day out.  Although we were doing Lebanon with kids and kids get bored very easily, ee really wanted to visit some Roman Ruins we had heard about in a town called Baalbeck, which are apparently the most well preserved Roman Ruins outside of Rome, so we booked a car through the hotel and did an all day tour of Beirut and Baalbeck.  The van arrived, we buckled up Max’s carseat and threw the child carrier in the back and we were off.  If you’re wondering how we got a two year old’s enormous car seat from Doha to Beirut, we used one of these bad boys and checked it as luggage.  We brought the child carrier as a carry on bag since we had 4 people traveling.  A little tip: since the carseat bag was big, we could easily stuff other stuff in there–we put some of Max’s clothes in there to save room in the suitcase and we also put his lovie, George, in there.

The first part of our tour was all over the city of Beirut, which was quite fascinating. I had no idea that the main language spoken in Lebanon is French and there is a huge Christian population.  Beirut was a fascinating mix of Mosques and Churches, and bombed out buildings. And much of the architecture had bullet holes from the decades long civil war. 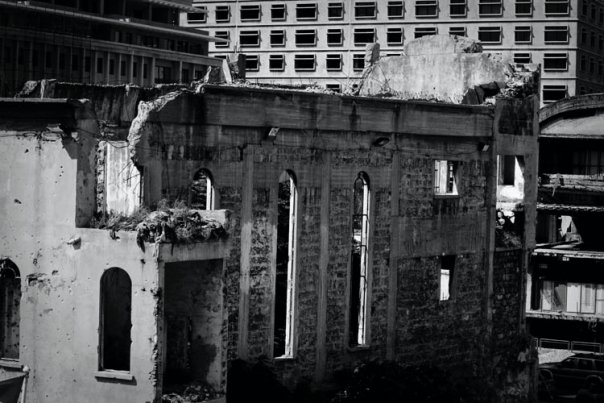 The city is located on the Mediterranean and absolutely breathtaking.  A cosmopolitan city with expensive shopping, bombed out building and a coast to die for.  The Corniche Beirut is known for its expensive high-rise apartments, chic restaurants and seaside cafes and amazing views of Pigeon Rock.  Our guide told us the apartments along the corniche sold for millions of dollars.  The street is lined by palm trees and young people ready to party.  I wish I could review a fun nightclub along the corniche but, alas, I cannot.  Pregnant!  And old!  With a two year old! 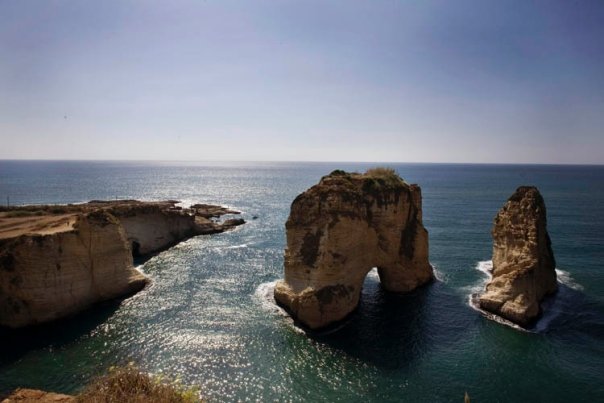 So within two hours into our excursion it comes to me that I have gone without food for about an hour and I begged to sit down.  In a chair. With some liquid. Something.  Everyone obliged and we sat at one of this lovely seaside cafes and drank a glorious Coke. 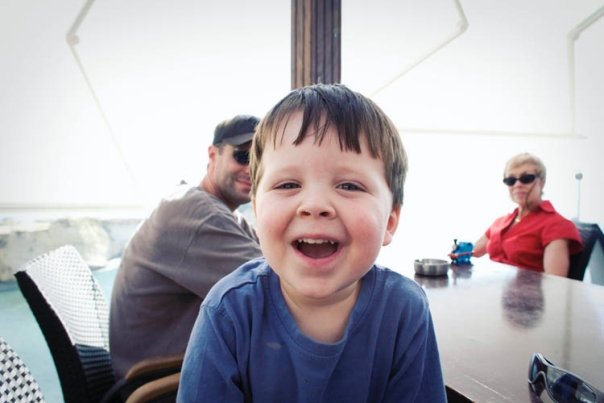 Here’s the face of Lebanon with kids. Unborn child? Kicking the crap out of me from the Coke.

After we enjoyed our little break, we got back in the van and took off for Baalbek, about an hour and a half drive from Beirut.  Along the way, we saw such interesting sites such as beautiful Cypress trees and farms.  On of the most interesting sites we saw were houses with metal poles sticking out of the top.  When we asked our guide what the metal poles were for he told us that all houses have that in preparation for the family growing, whether through marriage or more children….they are always prepared to add another story onto the house.  He was quite horrified to find that we do not live with our parents. Fascinating.

When we arrived at Baalbek (after, of course stopping no less than twice for me to pee…pregnant!), we were greeting by some lovely military men carrying gigantic Uzi type guns.  Like, as tall as my child.  So wanted to get a picture of George with the Uzi men but they were having none of it.  So odd to see men carrying machine guns like it was no big thing.  Something tells me that guns like that would so not go over well walking down the streets of Denver.

Baalbek was nothing short of amazing….aside from the searing, sweaty heat, which, strangely, no other non-pregnant people seemed to notice.  If you are wondering if there are any safety precautions, which we Americans are used to seeing everywhere, the answer is no.  Case in point:

See the teeny tiny people and the guard rail? Oh, you don’t see the guard rail? That’s because there wasn’t one and I was terrified that Max was going to leap into oblivion at any moment.

The most perfectly preserved ruins in the world outside of Rome are here. 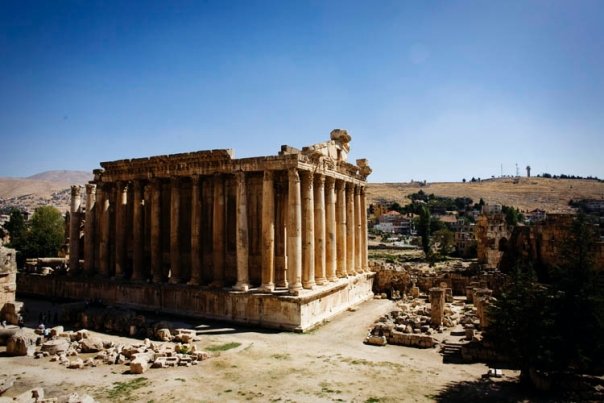 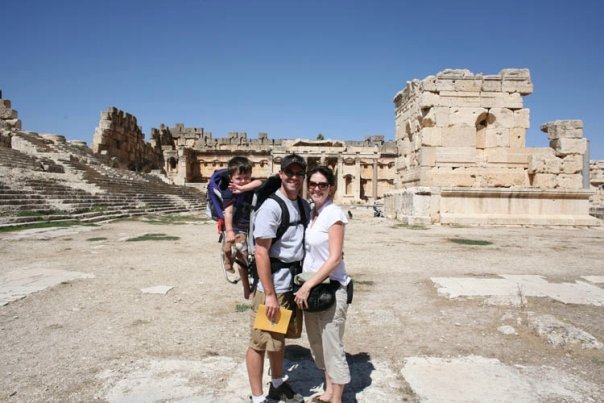 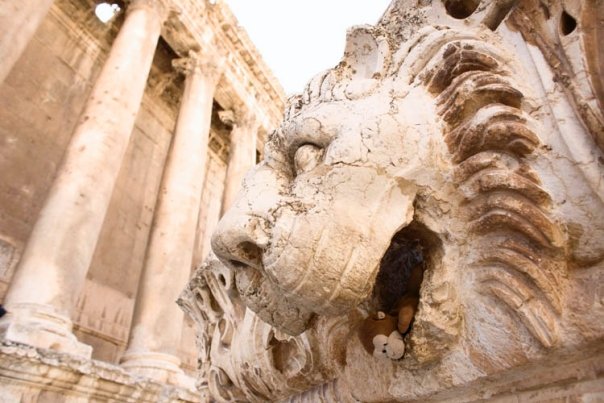 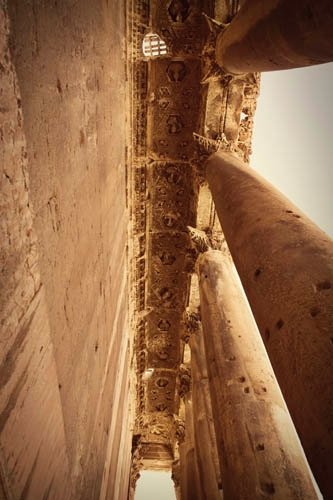 So about an hour into this gorgeous excursion, I realized I HAD NOT EATEN IN TWO HOURS.  And no one in my little group….my husband, my mother and father in law nor my 2 year old had noticed this. Wasn’t everyone starving???  Virtually dying of hunger?  I insisted we stop. Our guide took us to a dubious restaurant.  Where they served us something.  And it was delicious. I can’t believe we all didn’t get worms because it was a meat substance that I didn’t recognize but it was DELICIOUS. If you’re doing Lebanon with kids, they’ll probably eat the food!

Eventually I, of course, needed to pee and Max needed to go to the bathroom also so we set off in search of the facilities.  We were guided by a nice lady down a mysterious half inside, half outside hallway, around a couple of corners and we entered.  Hideous.  HID. E. OUS.  Hands down, the most disgusting, awful bathroom I’ve ever seen been in.  And I was pregnant.  Alone in a bathroom with a 2 year old and there was no way I was letting his little innocent baby butt touching that toilet seat, as rudimentary as that toilet seat was.  I lifted Max and proceeded to hold him, hovering over the seat while he did number 2,  swearing under my breath.  Forget washing hands–I was just praying someone had hand sanitizer.  After hovering my own huge pregnant backside over the toilet seat, I was red faced and sweaty and unbelievably relieved to get back to the table and drink another gallon of Coke.

We polished off the food and got back into the van for the hour and a half drive back to Beirut.  I’m not embarrassed to say that by the time we arrived back in the city, I was sleeping and drooling all over my shoulder. 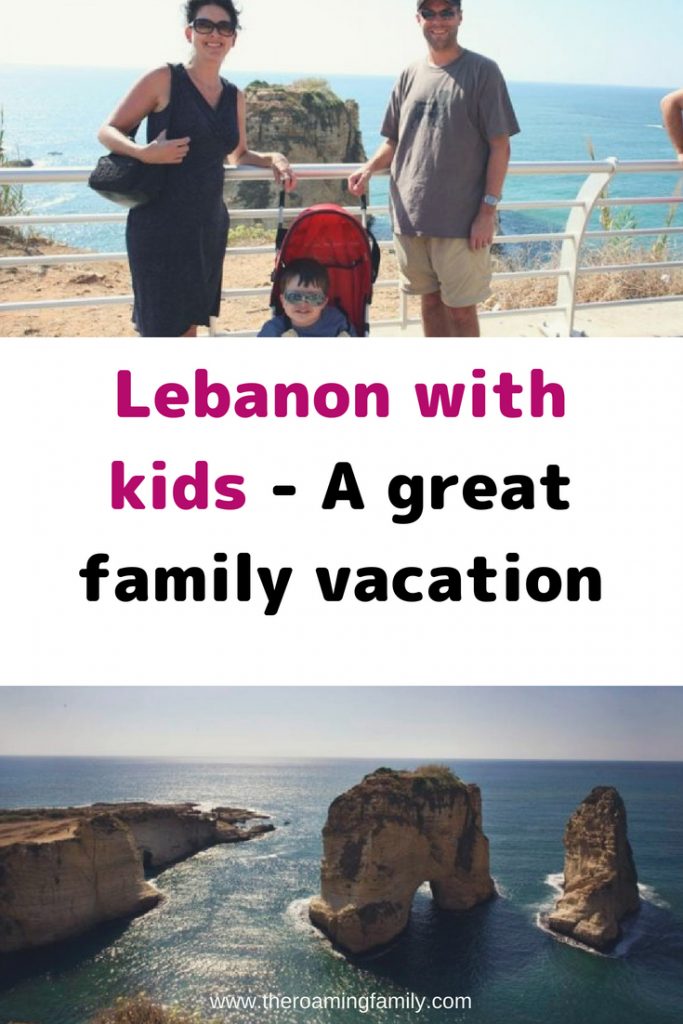